The corner of a modest Bedok South apartment is not where you might expect to come across an impressive collection of some 100,000 red packets.

But it is where you will be greeted by long tables on both sides of the flat that bear the weight of thousands of red packets – and of history.

Mr Poo Ah Dek has been collecting red packets since the turn of the millennium. His massive collection rises from floor to ceiling, covering nearly every inch of living room wall. He emerges from a room in the back with a large, white album clasped in his hands.

“These are the OCBC red packets I own,” he says in Hokkien with a smile. “I should be one of the very few people in Singapore to own these rare specimens from the 1950s.”

Standing along a thin path parting the red sea of paper in his living room, the genial octogenarian who does odd jobs gives us a fascinating, first-hand look at his hobby and OCBC’s red packets over the years.

Thank you for sharing your collection with us. How are you?

I’m good. Not doing much these few days, just going out to collect red packets.

When did you start collecting red packets?

I started collecting in the year 2000. I thought red packets were very pretty, so I collected them. I’ve accumulated so many over the years. Now they are even prettier these days!

How did you start collecting?

I started with phone cards before moving on to collect MRT farecards. But when they stopped being produced around 2000, I decided to collect red packets instead.

Do you collect all kinds of red packets?

I collect every kind of red packet. I even have green packets for Hari Raya and Deepavali! There are different types of red packets: some I consider special, and some are just ordinary.

Where do you usually get the red packets?

Usually, I would go to the bank to collect them. Any bank that I have an account with, including OCBC Bank. I can’t collect from banks that I don’t have accounts with so what I’ll do is to exchange what red packets I have with others. I have red packets from almost every bank.

Sometimes I buy them from shops in markets or elsewhere.

I often went to the Thieves’ Market at Sungei Road, which was closed down in 2017, to search for red packets. That’s where I found many of the older OCBC red packets. I would only buy red packets at the most affordable prices, from around $0.30 to $0.50 a pack which might have between 8 to 10 red packets. Then I’d sell them for about $3 to $8 a set.

How do you choose which red packets to give and which to keep?

I will keep old and unique ones. For example, I will not sell the older ones from OCBC because they are unique and rare.

OCBC’s red packets are my best and rarest because OCBC is Singapore’s oldest bank! Maybe no one in Singapore has some of them except Uncle Poo [Editor: Endearingly, Mr Poo sometimes speaks of himself in the third person]! When you go through OCBC’s angpows from long ago through till today, it is interesting to see the look, logo and design change – going from old-fashioned to modern.

While I have red packets from other banks, I don’t have as many as I do from OCBC. Check out this one, it has the OCBC building on it (below). 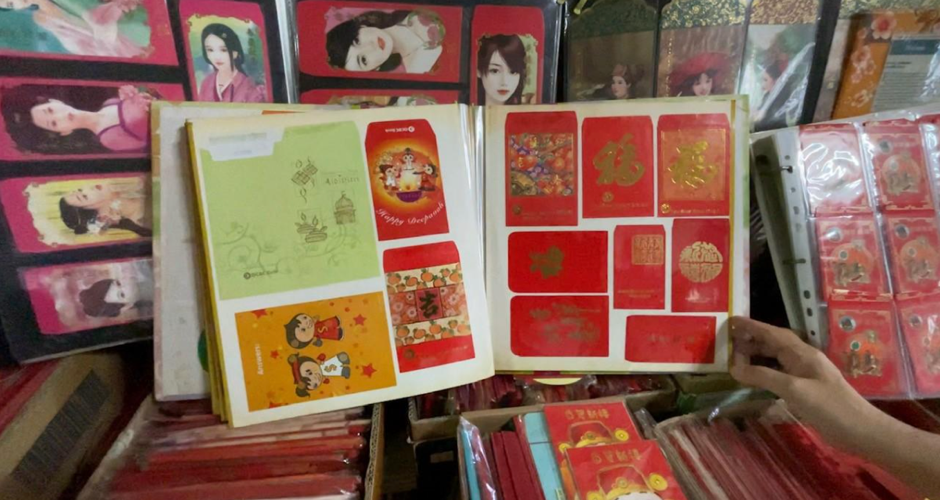 How do you arrange your collection?

I use different albums for different organisations but not much more than that. Because of space constraints, I don’t collect that much anymore.

Where would you go to sell red packets?

I used to go to Fook Hai Building in South Bridge Road to sell red packets once a week but the authorities asked me to stop. I traded red packets with other collectors at Chinatown Point and Lorong Ah Soo, as part of a regular event organised by a community centre. Before COVID-19, I had also rented a few feet of space at Far East Square to sell red packets on the weekend. Red packets that carry the organisation’s logo – especially old logos – and names are much more valuable. What is the most expensive red packet you sold?

It was sold for $160. That was a price that was offered to me by the buyer.